1. FOCUS ON THE ASTRAZENECA VACCINE

1.2 What happened to the confidence in the AstraZeneca vaccine?

1.3 CEO, Pascal Soriot, continues to talk up the AstraZeneca vaccine

2.1 Israel: 600 children given COVID-19 vaccination with no serious side-effects

2.4 US has enough excess doses ordered/optioned to help 1.5 billion people

2.6 Pandemic blamed for falling birth rates across much of Europe

2.7 Of 1,400 people who developed “Long COVID”, 32% initially had asymptomatic infections

1. FOCUS ON THE ASTRAZENECA VACCINE

On 3 March, Reuters reported that: “France has used only a quarter of its AstraZeneca COVID-19  vaccine doses, a health ministry official indicated on Tuesday, saying its utilisation rate stood at 24% as  of Feb 28, well below a target set at 80%-85%.

“This compares with 82% for vaccines made by Pfizer/BioNTech and 37% for those made by Moderna.”

1.2 What happened to the confidence in the AstraZeneca vaccine?

The European Medicines Agency approved the AstraZeneca vaccine for all adults in late January.

However, several European countries, including France and Germany, restricted its use in over-65s due  to a lack of data about its effectiveness in older people. French President, Emmanuel Macron, said that  the vaccine was “quasi-ineffective” in older age groups. Quoting an anonymous source in Germany’s  health ministry, the German newspaper Handelsblatt reported that the jab was more or less ineffective in  the elderly.

However, the French and German regulators have both now reversed their advice not to give the vaccine  to over-65s. Data released by Public Health England, currently in a non-peer-reviewed pre-print version,  found that in the over-80s, a single shot of either the AstraZeneca or Pfizer vaccine appears to be over  80% effective at preventing hospitalization.

There is no evidence that the French and German regulators’ prevarications – as well as loose talk from  politicians and bureaucrats – have undermined confidence in the AstraZeneca vaccine. German  Chancellor, Angela Merkel, has said that there’s now an “acceptance problem” with the vaccine.

The millions of unused AstraZeneca doses in France and Germany highlight that it is crucial to  understand how fragile vaccine confidence is in some European countries and to make sure ill-advised  comments don not undermine demand.

(Précise from an article in The Conversation)

1.3 CEO, Pascal Soriot, continues to talk up the AstraZeneca vaccine

The Guardian has published an article by Mr Soriot: “As discussed in our update on 9 March, the CEO of  AstraZeneca is attempting to counter the (probably unwarranted) somewhat negating perception of the  AstraZeneca COVID-19 vaccine. We have provided most of the statistical data presented by Mr Soriot in  our previous article, so it will summarised here.

“We at AstraZeneca, working with our partners in the multilateral COVAX initiative, are doing all we can to  make sure people around the world have access to safe, effective COVID-19 vaccines, wherever they live  and regardless of income level. AstraZeneca was the first global pharmaceutical company to lend its  support to the initiative and our vaccine will be the single biggest contributor in the first half of this year.

“Recently, the WHO granted emergency use listing for the AstraZeneca vaccine, paving the way for its  rapid rollout, including to low- and middle-income countries. In the past ten days, the first shipments of  our vaccine have arrived in more than 30 countries and counting, including Ghana, Senegal, Rwanda, the  Democratic Republic of the Congo, Cambodia, the Philippines and Moldova, with the aim of supplying  142 countries with hundreds of millions of doses of the vaccine over the coming months. This supply  represents the first COVID-19 vaccine for many of these countries. For some, it will be their main source  of vaccines.

“We have a growing and substantial body of data that demonstrates how effective this vaccine is. Recent  real-world data from 1.1 million people in Scotland shows it is highly effective. It reduces the risk of being  admitted to hospital because of COVID-19 by 94% after just one dose. These findings were backed by  data from Public Health England, which showed the very high effectiveness of our vaccine in vulnerable  elderly members of society. Just in the last week in Europe, we have seen France, Germany and Sweden  approving the AstraZeneca vaccine for people over 65.

“We made an early commitment to supply billions of doses around the world at no profit, irrespective of a  nation’s income level. If we stay the course, these highly effective vaccines will begin clearing the path  towards something approximating normality throughout the course of this year. But we will only do this if  we can make sure the vaccine is available to all. We continue to do everything in our power to make  access to the vaccine broad, timely and equitable.”

2.1 Israel: 600 children given COVID-19 vaccination with no serious side-effects

The Guardian reports that hundreds of children in Israel between the ages of 12 and 16, who suffer from  underlying conditions that make them vulnerable to coronavirus, have been given the Pfizer/BioNtech  vaccination and have experienced no serious side-effects…

The Global Times reports on an interview with Yin Weidong (Yin), the CEO of Sinovac:

“Current figures show that the protection rate of Sinovac vaccines within two months after administering  two shots is 80-90 percent, but the number of antibodies in recipients declines with time.

“We are now analyzing data on protection rates after six months as well as conducting experiments on  administering the third injection to recipients to see if there is a higher protection level. Some results are  expected to come out soon.

“Sinovac has expanded its annual production capacity to 2 billion doses and offered its inactivated  vaccines to over 16 countries and regions.”

“’This order allows for the president to plan for the future and the latter part of the year,’ Andy Slavitt,  White House senior adviser for COVID-19 response, said during a briefing by the White House COVID-19  Response Team. ‘This is war time, and as facts still emerge, it gives us maximum flexibility for our  upcoming needs.’”

Sciencemag.org reports on the over purchasing of COVID-19 vaccine by many high-income countries: “Like three dozen other countries, the United States contracted with multiple vaccine companies for  several times the number of doses needed to cover its population. No one knew at the time which, if any,  of the candidate vaccines would work or when they might prove safe and effective. 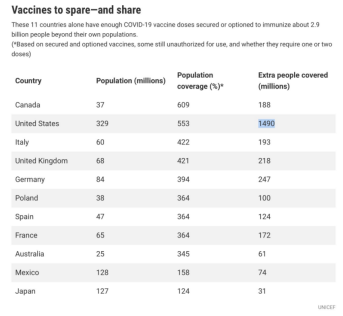 “But by now, most of the pre-purchased vaccines appear to offer solid protection—which means many countries will receive far more vaccine than they need.

“The excess doses the United States alone may have by July would vaccinate at least 200 million people. Over the next year or two, US surplus doses and those from other countries could add up to enough to immunise everyone in the poorer nations that lack any secured COVID-19 vaccine.”

Eric Feigl-Ding reports on Twitter that with the B.1.1.7 variant now causing about 50% of COVID-19 in  Stockholm, there has been a significant increase in paediatric cases: 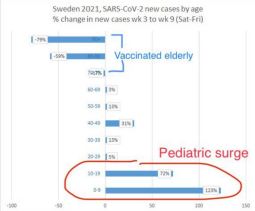 “This matches data in the UK… where B.1.1.7 is nearly completely dominant, and from February 2021 now have the highest positivity rate of all age groups – which was not previously the case.

“This also matches the data and warnings coming from Italy – health officials also concerned about the new sudden paediatric surge.”

2.6 Pandemic blamed for falling birth rates across much of Europe

The Financial Times reports on the falling birth rates in Europe. 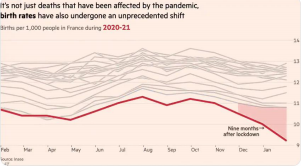 The New York Times reports that: “Many ‘Long COVID’ patients had no symptoms from their initial  infection. An analysis of electronic medical records in California found that 32% started with  asymptomatic infections but reported troubling after-effects weeks and months later.”

POLICE REPORT / Unlawful Killing of Stock in Cape York – Can You Help Stop It?