1. New US data shows AstraZeneca vaccine is effective for all adults

2. The vaccine gap is bad for the world

3. Only 20 countries have vaccinated more than 5% of their population

4. Chile is currently giving the most doses per 100 people per day

1. New US data shows AstraZeneca vaccine is effective for all adults

The AstraZeneca vaccine has suffered reputational damage due to:

• Mix up in dosing in original trial

• Not enough people > 65 in original trial

Results from much-awaited US study (published by AstraZeneca 22 March)

• 100% efficacy against severe or critical disease and hospitalization 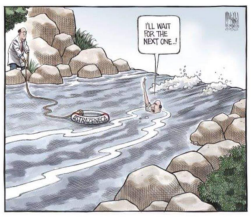 MORAL: The best vaccine is the one that you have before you have COVID-19!!

2. The vaccine gap is bad for the world

The New York Times reports that:

• “Of the COVID-19 vaccine doses given globally, roughly ¾ have gone to only ten countries. • At least 30 countries have not yet injected a single person.

• Many poorer nations could wait years for their shots.”

“Many countries were relying on the global vaccine program known as COVAX, which was created  around the idea that all countries would buy vaccines through a single mechanism, but dozens of wealthy  nations went straight to pharmaceutical companies and elbowed the program out of the way.”

3. Only 20 countries have vaccinated more than 5% of their population 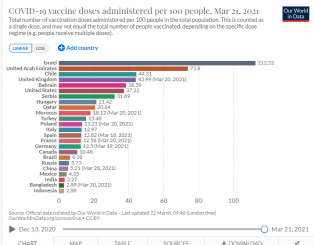 4. Chile is currently giving the most doses per 100 people per day 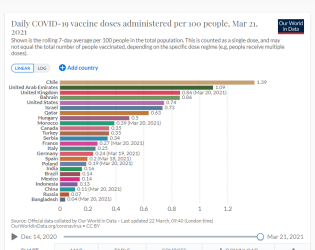 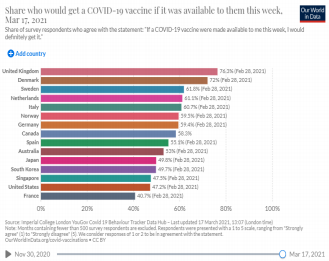 The New York Times reports: “European health agencies this week faced, with millions of lives in the  balance, a staggeringly high-stakes incarnation of what ethicists call the trolley problem.”

“Imagine standing at a railway switch. If you do nothing, a trolley barreling down the track will hit three  people in its path. If you pull the lever, the trolley will divert to an alternate track with one person. Which  option is morally preferable: deliberately killing one person or passively allowing three to die?

“In Europe’s version, German regulators identified seven cases of a rare cerebral blood clot – three of  them fatal – out of 1.6 million who had received the AstraZeneca vaccine. Regulators had no proof they  were linked. Still, continuing vaccinations might make them responsible for putting a handful of people in  harm’s way — like pulling the lever on the trolley tracks.

“Instead, the German authorities withdrew approval for the vaccine. Neighbouring countries followed,  waiting for the European Union drug regulator to deem the vaccine safe, which it did on 18 March.”

“’Today, we clearly have the capacity to deliver 300 to 350 million doses by the end of June and  therefore by July 14 … we have the possibility of reaching continent-wide immunity,’ he said.”

WHOAFRO has tweeted this information and continued: “This covers more than 60% of the population  targeted in the Greater Accra region. The country received 600,000 vaccine doses from COVAX last  month.

“Britain’s COVID-19 vaccine programme faces a two-month delay in the event of an EU export ban,  derailing the government’s plans to reopen the economy this summer,” an analysis for the Guardian  reveals.

“The comparatively small number of doses that would be kept within the bloc would speed up the full  vaccination of every adult in the EU by ‘just over a week’, the research suggests.”

The Guardian reports: “Dr Tedros Adhanom Ghebreyesus says the world needs to be ‘on a war footing’. He supports a patent waiver that would allow countries to make and sell cheap copies of vaccines that  were invented elsewhere.

“Tedros argues that the manufacturers will still get some reimbursement. ‘Waiving patents temporarily  won’t mean innovators miss out. Like during the HIV crisis or in a war, companies will be paid royalties for  the products they manufacture,’ he says.”

POLICE REPORT / Unlawful Killing of Stock in Cape York – Can You Help Stop It?