1. What is the AstraZeneca vaccine efficacy (after the dust settles)?

7. Chile to test if COVID-19 vaccines can prevent deaths during major wave

9. No new cases in the Navajo Nation

1. What is the AstraZeneca vaccine efficacy (after the dust settles)?

AstraZeneca has published updated efficacy results for its COVID-19 vaccine and these have been  submitted to the US Food and Drug Administration (FDA) Independent Safety Monitoring Board for  analysis.

In summary, the AstraZeneca vaccine showed:

2) 100% efficacy against severe or critical disease and hospitalisation

Tweet from Vincent Rajkumar: “All this quarrel was over whether AstraZeneca vaccine is 79%  effective or 76% effective. Pundits/Experts: Don’t let irritation with how the company managed  the trial supersede the fact that this is a great vaccine that saves lives.”

To learn more about how the FDA approves pharmaceuticals, listen to this fantastic interview from 5  October 2020, with Dr Peter Marks, Head of the Center for Biologics Evaluation and Research (CBER)

Reuters reports that: ”AstraZeneca cannot export any more COVID-19 vaccines from Europe until it makes good on its contracts with the European Union, EU Commission Chief Ursula von der Leyen said  after a meeting of the leaders of the 27-nation bloc.

“’We have to and want to explain to our European citizens that they get their fair share,’ she told a news  conference late on 25 March.”

Reuters reports: “Confidence in the safety of AstraZeneca’s COVID-19 vaccine has taken a big hit in  Spain, Germany, France and Italy as reports of rare blood clots have been linked to it and many countries  briefly stopped using it, poll data showed on 22 March.

“YouGov’s poll – which covered about 8,000 people in seven European countries between March 12 and  18 – found that in France, Germany, Spain and Italy, people were now more likely to see the AstraZeneca  vaccine as unsafe than safe.”

A paper published in the New England Journal of Medicine on March 23, has helped us understand the LOW risk of getting COVID-19 after vaccination:

Among 1,000 people without vaccination:

5. WHO: Vaccine makers should license technology to overcome “grotesque” inequity

Reuters reports: “More producers of COVID-19 vaccines should follow AstraZeneca’s lead and license  technology to other manufacturers, WHO Director-General Tedros Adhanom Ghebreyesus said on 22  March, as he described continuing vaccine inequity as “grotesque”.

“AstraZeneca’s shot…is being produced in various locations including South Korea’s SKBioScience and  the Serum Institute of India.

“Dr Tedros called for more manufacturers to adopt this model to boost supplies, including supplies for the  COVAX vaccine sharing programme seeking to speed more shots to developing countries.

“’The inequitable distribution of vaccines is not just a moral outrage, it’s also economically and  epidemiologically self-defeating,’ he said.”

This first comprehensive analysis of the pandemic on the continent looked at COVID-19 data across the  55 countries in the African Union from 14 February to 31December 2020.

It is also possible that variants contributed to a higher caseload in wave two. 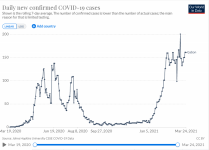 Vaccine given to 0 % of population 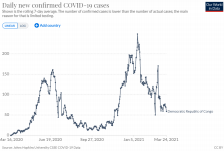 Vaccine given to < 0.1% of population 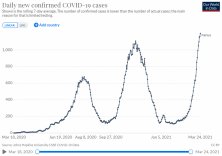 Vaccine given to 0.1% of population 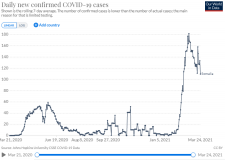 Vaccine given to 0% of population

7. Chile to test of if COVID-19 vaccines can prevent deaths during major wave

Vincent Rajkumar tweets: Chile will give the first real world preview of how good COVID-19 vaccines are  in preventing deaths in the face of a major rise in cases.

Chile has the highest vaccination rate in The Americas. Vaccines started in February – cases are surging  massively in March. 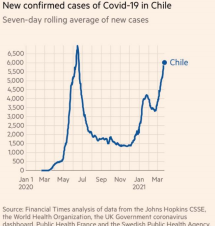 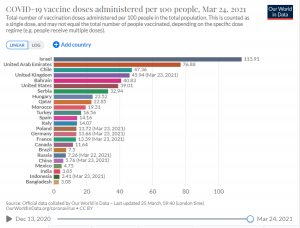 • more spread throughout the US

• multiple reports of sera from mRNA and AZ vaccines show preserved neutralising antibodies vs P.1  but no clinical trial to date 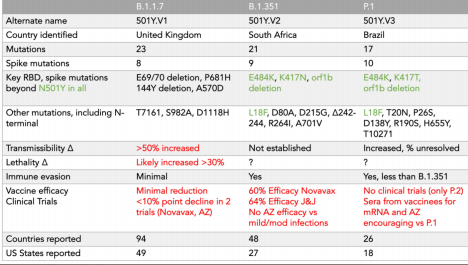 9. No new cases in the Navajo Nation

• After an aggressive immunization campaign, 38% of Navajo citizens have been fully vaccinated • The tribe, whose land stretches across Utah, Arizona and New Mexico, had the highest per capita  infection rate in the US at the height of the pandemic

The Canadian government has now given responsibility to the University of Manitoba to provide COVID 19 vaccinations to all 63 Manitoba First Nations.

The plan for the vaccine rollout is being implemented in partnership with the Assembly of Manitoba Chiefs  (AMC), Southern Chiefs’ Organization and Manitoba Keewatinowi Okimakanak as well as Keewatinohk  Inniniw Minoayawin.

“We were asked to lead the vaccine rollout because of our strong collaborative relationships with First  Nations and our expertise at delivering trusted, culturally safe care in our communities,” said Melanie  MacKinnon, Head of Ongomiizwin, the Indigenous Institute of Health and Healing at the University of  Manitoba.

European Scientist reports that tumor vaccines can help the body fight cancer. Mutations in the tumor  genome often lead to protein changes that are typical of cancer. A vaccine can alert the patient’s immune  system to these mutated proteins.

For the first time, physicians and cancer researchers from Heidelberg and Mannheim have now carried  out a clinical trial to test a mutation-specific vaccine against malignant brain tumors. The vaccine proved  to be safe and triggered the desired immune response in the tumor tissue, as the team now reports in the  journal Nature.

A total of 33 patients newly diagnosed with a IDH1-mutated glioma (WHO grades III and IV astrocytomas) were enrolled in the study.