1. Vaccine innovation: what’s around the corner?

2. A global look at case and vaccination rates

1. VACCINE INNOVATION: WHAT’S AROUND THE CORNER

• However, vaccine innovation has not stopped – rapid development of new technologies continues • Here we present a précise of a comprehensive article in Science

• CureVac and CEPI have been co-developing portable mRNA printing technology, which could rapidly  produce hundreds of thousands of vaccine doses in localized settings. This is at prototype stage.

• CEPI is “in active discussions” with GreenLight Biosciences, which has developed a low-cost cell-free  mRNA production method that relies on harvesting nucleotides from yeast biomass (protein source  obtained from processes in which bacteria, yeasts, other fungi or algae are cultivated in large  quantities).

• Next generation vaccines will need to generate immune responses that protect across strains and so  they will target the T cell epitopes (part of an antigen) on the virus.

• This is a system to combine the hepatitis B virus surface antigen (HBsAg) with the  SpyCatcher/SpyTag ‘plug and display’ protein conjugation technology to present S protein to the  immune system.

• HBsAg spontaneously forms a VLP (virus-like particle), a structure to which it is possible to attach any  protein antigen. The technology exploits a domain—the second immunoglobulin-like collagen adhesin  domain (CnaB2)—from the Streptococcus pyogenes fibronectin-binding protein FbaB, engineered  into a peptide tag (SpyTag) of 13 amino acids and a protein partner (SpyCatcher) of 138 amino acids.

• When the SpyTag and SpyCatcher come into proximity, a stable intramolecular isopeptide bond  spontaneously forms as a result of nucleophilic attack by the unprotonated amine of SpyTag’s Lys31  on the carbonyl carbon of SpyCatcher’s Asp117 (catalyzed by a neighboring Glu77 residue).

• The SpyCatcher domain can be embedded in the VLP structure and the SpyTag in any antigen of  interest.

• Mixing the two together results in consistent, stable VLPs that are richly decorated with antigen.

• Another VLP technology based on a computationally designed protein nanoparticle is in early stage  trials under a partnership between SK Bioscience of Seongnam, South Korea, and CEPI. • Their COVID-19 vaccine, GBP-510, comprises two protein components: a trimer protein to which the  target antigen (S protein) is fused and a pentamer that, when combined with the trimer,  spontaneously forms a VLP structure.

• A single particle can accommodate sixty copies of a target antigen.

• Mouse data show the structure to be highly immunogenic, even at low doses. • The neutralizing titer of a VLP is thought to be inherently superior to soluble protein approaches and  to be the proper size for immune trafficking to the lymph nodes.

• The group has now started testing its construct against a B.1.351 lineage strain.

• The Serum Institute of India is developing a live-attenuated COVID-19 vaccine through a partnership  with Codagenix, which has developed codon deoptimization techniques to impair viral replication.  • For its SARS-CoV-2 vaccine, COVI-VAC, Codagenix has introduced 283 silent mutations into the  gene encoding the viral spike protein.

• “Our platform is an algorithm—it’s not a carrier virus, it’s not a VLP,” says CEO and co-founder  Robert Coleman.

• Now in phase 1 trials, COVI-VAC is administered as a single-dose, needle-free intranasal vaccine and can be easily manufactured at scale.

• The company is employing the approach using respiratory syncytial virus (RSV), rather than SARS CoV-2 itself, as a carrier vector to present the SARS-CoV-2 S protein to the immune system. • Its candidate vaccine is also nasally administered in a single dose and is designed to elicit a  mucosal, as well as a systemic, response.

• The vaccine should be very inexpensive.

• Vaxart is among the first to be developing an oral COVID-19 vaccine.

• However, the vaccine was less effective at eliciting a systemic antibody response.

• UK-based Emergex, is focusing on eliciting a strong T-cell response.

• Its approach is based on identifying viral epitopes that are the target of the early T cell response. • Emergex is developing a synthetic peptide-based vaccine designed to generate tissue-resident T  cells that recognize viral peptides generated early in the infection cycle.

• The company aims to begin clinical trials in the United States, Europe and Brazil, where it has a  partnership with the Oswaldo Cruz Foundation of Rio de Janeiro, an established vaccine research  institute.

• Drone technology is being deployed to speed distribution to remote areas—in Ghana, 2.5 million  vaccines will be delivered in this way, through a partnership between Zipline, a medical drone delivery  firm, the UPS Foundation and the country’s government

• “Whether the pipeline of next-generation COVID-19 vaccines will be needed is as yet unclear, given  the uncertainties surrounding both the duration of protection and the level of protection the current  vaccines provide against the main pandemic strains and the emerging variants.

• “Real-world data from those countries furthest advanced in their immunization programs will help to  clear up some of the uncertainties.

• “In the meantime, the continued flow of finance is vital to place the most promising technologies on a  firmer footing.

• “The resounding success of the mRNA vaccines was built on decades of investment—but the solution  to bringing this deeply damaging pandemic to an end is likely to require a much broader set of  different vaccine platforms that work in various countries with varying resources, have different price  points, work in different demographics and neutralize a broad set of viral variants.”

2. A GLOBAL LOOK AT CASE AND VACCINATION RATES

Here we to present a selection of COVID-19 case activity and vaccination rates by country. 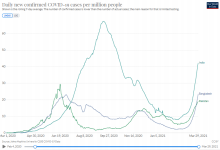 “’We have so much to look forward to, so much promise and potential of where we are, and so much  reason for hope. But right now I’m scared,’ she said.”

The BBC reports that no COVID-19-related deaths have been reported in London for the second time this  year.

“Public Health England (PHE) figures for 28 March showed no deaths had been registered of patients  within 28 days of a positive coronavirus test.

“During a spike in cases during January, more 200 deaths a day linked to the virus were recorded in the  capital.”

Selfish or sensible? How Indonesia is charting its own course with private vaccines

The Sydney Morning Herald reports that Indonesia, having suffered over 40,000 deaths and 1.5 million  recorded infections, is again changing its vaccination strategy.

Controversially, the first strategy was to prioritize the 18-59 age group. Higher mortality in the older age  groups caused this to be abandoned.

The second strategy was to utilize social media “influencers” to reduce doubts about the vaccines among  the Muslim community.

In April, the third strategy will allow a corporate scheme to run parallel to the general vaccination program.  Private companies will be able to buy doses themselves and distribute them to employees and their  families for free.

The New York Times reports: “The Russian government has contracted some of the manufacture of  Sputnik V vaccine to a South Korean company that has already exported the vaccine to Russia. There  are plans to do the same with a company from India.

“The imports, which are expected to ramp up in coming weeks and months, could help Russia overcome  a dismally slow vaccination rollout at home.

“India’s ambassador to Russia, Shri Varma, said at a news conference in January, ‘We envisage a major  roll out of Sputnik vaccine in India, as well as for the entire world, using the Indian production capacities.”

Madeira lets in tourists who can show COVID-19 “vaccine passport”

The Guardian reports: “Madeira** is one of the few places in Europe accepting tourists. Since 18  February it has been operating a green corridor for tourists who have recovered from COVID-19 in the  previous 90 days or who have been fully vaccinated. This may foreshadow the future of vaccine  passports for EU travel.

“Vaccinated travellers must present an immunisation certificate in English, validated in their home  country, that includes their name, date of birth, type of vaccine, and the date (or dates) it was  administered.

**Madeira: located off the coast of Morocco and more than 800km from mainland Portugal

The Financial Times reports that Germany, France and Poland have soaring infection and death rates  amid slow vaccine roll-out. Their hospitals are at risk of being overwhelmed by COVID-19 cases as  leaders struggle to get a grip on the pandemic after a week of “ill-conceived lockdown.”